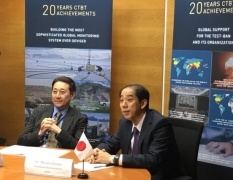 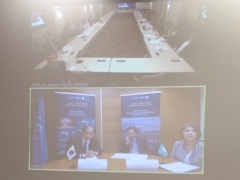 On 20 February 2017, in cooperation with the Provisional Technical Secretariat of the CTBTO, a video conference with members of the CTBT Youth Group at the University of Texas and other young people in Washington, DC, USA, was held in the Vienna International Center. The video conference was attended by Ambassador Mitsuru Kitano of Japan and Ambassador Kairat Sarybay of Kazakhstan. (Japan and Kazakhstan currently serve as the co-coordinators to lead international efforts for the promotion of the entry into force of the CTBT.)

In the video conference, two ambassadors explained to the young people interested in the CTBT about the significance of the CTBT in the nuclear disarmament agenda and the role of youth in promoting CTBT ratification and, more broadly, nuclear disarmament. In his discussion of the CTBT, Ambassador Kitano pointed out the importance of promoting the entry into force of the CTBT, which is supported by a vast majority of countries and can serve as an effective and realistic step towards nuclear disarmament, while the international community is divided over ways to advance nuclear disarmament. He emphasized the need to mobilize international efforts to bring the CTBT into force, while further strengthening the International Monitoring System (IMS) for detecting possible nuclear explosive tests. In addition, Ambassador Kitano explained about the “youth communicator for a world without nuclear weapons” program, a title conferred by the Japanese government upon those young people who actively pass on the realities of the use of nuclear weapons to the international community and future generations, and engage in efforts towards nuclear disarmament and non-proliferation. He, then, expressed high expectations for youth initiatives and the expansion of a youth network around the globe, inspiring participants to become a driving force in raising awareness about the CTBT in their society.

Ambassador Sarybay noted that the CTBT has not entered into force yet, although the Treaty, which is widely accepted as an effective way to restrain further development of nuclear weapons, can serve as the first step towards nuclear disarmament. In this sense, he highlighted the importance of raising awareness about the CTBT and building public pressure on decision-makers, in addition to continuing diplomatic efforts. Furthermore, Ambassador Sarybay explained about the case where civil protests had led to the closure of the Semipalatinsk (Kazakhstan) and other nuclear test sites, and expressed his hope for youth and their potential to create huge changes in society.

Participants actively raised a wide range of questions, including reasons for the remaining Annex II states’ reluctance to ratify the CTBT, effects of sanctions as ways to respond to nuclear issues, means to raise public awareness about the CTBT and solutions to nuclear testing by North Korea. After the video conference, participants gave positive feedback, renewed in their determination to achieve a world without nuclear weapons.