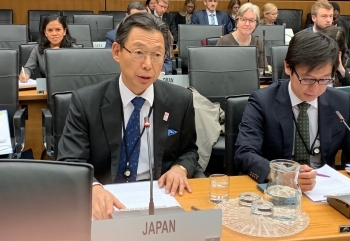 The Comprehensive Nuclear-Test-Ban Treaty (CTBT) is a pivotal treaty concerning nuclear disarmament and non-proliferation that bans all nuclear weapon test explosions or any other nuclear explosions. To this end, the Treaty comprises provisions to establish the verification regime including the International Monitoring Systems(IMS), On-sight inspections(OSI) and confidence-building measures in order to monitor States' compliance with the treaty. Japan, as the only country that has suffered atomic bombings, attaches great importance to the promotion of the Treaty and its verification regime, and thus gives top priority to the Treaty’s early entry into force through its ratification by the remaining eight “Annex 2 States”*, as well as the establishment and sustainment of the Treaty’s verification regime that would reliably detect nuclear testing carried out by North Korea.

To promote the treaty’s early entry into force, Japan actively engages in and/or supports the Conference on Facilitating the Entry into Force of the CTBT, the “Friends of the CTBT” ministerial meetings and initiatives by the Group of Eminent Persons (GEM), and has been active in calling for the early entry into force, signature and ratification of the CTBT on various occasions, such as at bilateral talks and international or regional forums. Regarding the verification regime, Japan maintains 10 monitoring and laboratory facilities of the IMS within the country, and actively contributes to strengthening the regime through capacity building of future station operators around the world and the provision of voluntary contributions to the CTBTO.

Japan has played an increasingly active role in this area in recent years. Ambassador Ozawa of the Japanese Permanent Mission in Vienna assumed the chairmanship of the Preparatory Commission for the CTBTO from January to August 2014. In September 2015, Foreign Minister of Japan, Kishida Fumio co-presided over the 9th Conference on Facilitating the Entry into Force of the CTBT with Foreign Minister of the Republic of Kazakhstan, Erlan A. Idrisov, and together with Kazakhstan, served as a Co-Coordinator to promote the Treaty’s entry into force for a period of two years (until September 2017). Additionally, Ambassador Kitano of the Japanese Permanent Mission in Vienna co-presided over related meetings with Ambassador Sarybay of the Kazakhstan Mission. Japan, together with Kazakhstan, issued a joint statement on the CTBT at the summit level in October 2015, which was followed by the issuance of another joint statement in March 2016 on the occasion of the Nuclear Security Summit. Furthermore, Ambassador Kitano raised public awareness about the Treaty by actively contributing to many symposiums held throughout the commemorative year of 2016 that marked the 20th anniversary of the CTBT’s opening for signature. Moreover, Foreign Minister Kishida chaired the 9th CTBT Ministerial Meeting in New York in September 2016, followed by Foreign Minister Kono Taro who co-chaired the 10th CTBT Ministerial Meeting in New York in September 2018 along with Australia.

Notably, Japan is the third largest provider of assessed contributions to the CTBTO budgets. In addition, Japan made significant voluntary contributions related to the field of the verification regime, including a contribution of USD 2,428,900 in March 2017 to strengthen the capability to detect nuclear tests conducted by North Korea, as well as a contribution of USD 803,571 to upgrade all five auxiliary seismic stations in Japan. Furthermore, Japan has been convening the annual JICA Global Seismological Observation Training Course since 1995. The purpose of this training is to develop human resources with skills of both seismic observation to detect nuclear tests and data analysis to identify them, which can play a crucial role for the verification regime of the Treaty.

Japan will make continued efforts to promote the early entry into force of the Treaty and further strengthen the Treaty’s verification regime.

* China, Egypt, Iran (Islamic Republic of), Israel, the United States of America (signed but not ratified); Democratic People’s Republic of Korea, India, Pakistan (not signed and not ratified)

Back to Top page