Japan’s New Voluntary Contribution of 2.4 million USD to the CTBTO and the Convening of a Commemoration Ceremony 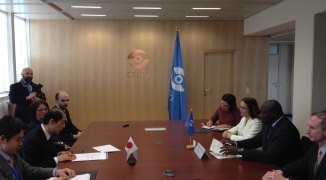 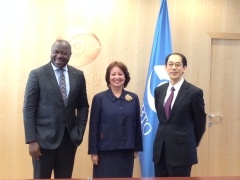 The Government of Japan has decided to allocate a supplementary budget totaling approximately 2.4 million USD to the CTBTO in order to boost the nuclear test verification capabilities of the CTBTO.

The contribution is being made in response to the successive nuclear tests by the Democratic People's Republic of Korea (DPRK) in January and September last year, as well as the adoption of UN Security Council resolution 2310 (2016) calling upon all States to provide the support required to enable the CTBTO to complete its task to build up a verification regime in the most efficient and cost-effective way.

Specifically, the contribution will be used for the following three projects:
1) To procure and deploy a mobile noble gas detection system;
2) To conduct measurement of background level of radio-xenon; and
3) To contribute to software development in order to enable more expeditious processing and evaluation of data upon the event of a nuclear test.

With the presence of the Chairperson of the Preparatory Commission for the CTBTO, Ambassador Paulina Maria Franceschi Navarro of the Permanent Mission of Panama, the commemoration ceremony took place on 23 February 2017. At the ceremony, Ambassador Mitsuru Kitano of the Permanent Mission of Japan and the Executive Secretary for Preparatory Commission for the CTBTO, Dr. Lassina Zerbo, exchanged relevant official letters.

At the outset of the ceremony, Ambassador Kitano mentioned that the verification regime of the CTBTO had proved its effectiveness and great service to the international community by detecting all five nuclear tests conducted by the DPRK. He hoped that Japan’s support would contribute to further strengthening the CTBTO’s verification regime by enhancing its capacity to detect any potential future nuclear tests.

The Executive Secretary expressed his appreciation for this largest-ever showing of voluntary support from Japan and called for continued close cooperation between Japan and the CTBTO with a view to promoting the entry into force of the CTBT.