In celebration of “Africa Industrialization Day 2019”, UNIDO, AUC and UNECA held a joint event at the Vienna International Centre on 20 November 2019. The Permanent Mission of Japan joined forces with UNIDO in co-hosting a reception to mark this important day.

In his welcome remarks, Mr. LI Yong, Director General of UNIDO, showed his appreciation for Japan’s great contributions to the industrialization of Africa in partnership with UNIDO. The Director General also mentioned UNIDO’s active cooperation in the Seventh Tokyo Conference on African Development (TICAD7) last August with five side-events, and expressed expectations for further collaboration between UNIDO and Japan towards economic transformation in the African continent. 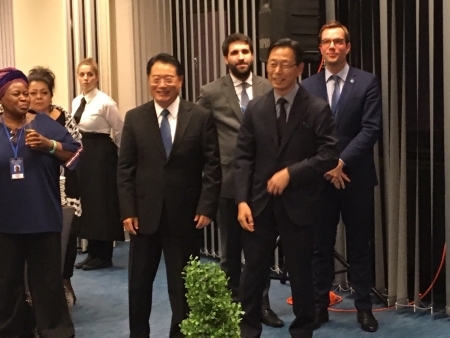 H.E. Mr. HIKIHARA Takeshi, Ambassador of the Permanent Mission of Japan, said for his part that, with the entry into force of the Agreement on the Africa Continental Free Trade Area (AfCFTA), Africa now faces a real window of opportunity for industrialization and economic structural change. He emphasized that, in this context, building partnerships among various stakeholders, including the private sector, is more important than ever, for which the TICAD process may serve as a powerful platform. Ambassador Hikihara also introduced the recent conclusion of MOUs between UNIDO and Japanese leading companies, such as NEC Corporation and Mitsui & Co. Ltd., and expressed Japan’s high appreciation for the role of UNIDO in bridging Japanese private sector and African countries. 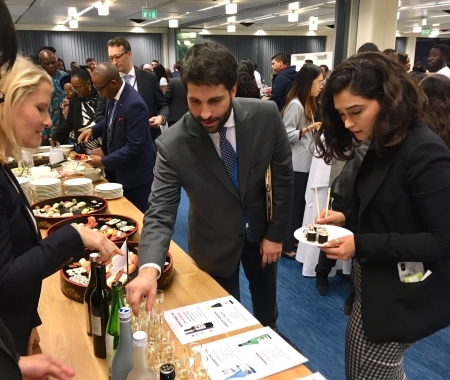 The very popular “Japan Booth” offering sushi and a variety of Japanese sake, together with a performance by African musicians, highlighted the cultural collaboration between Africa and Japan in Vienna, and presented an enjoyable evening to all guests.