The Permanent Mission of Japan to the International Organizations in Vienna hosted a Workshop on “COP 21 and beyond: a new climate regime and its implications for the future of nuclear power” 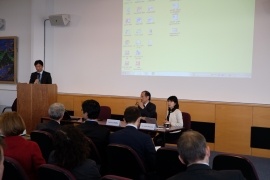 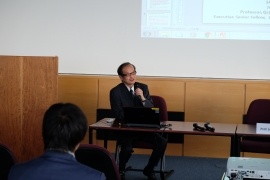 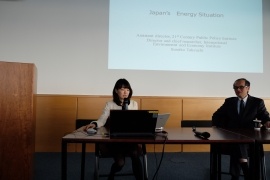 The aim of the workshop held at the public hall of the Permanent Mission of Japan on 14 December was to share the results and information obtained at COP21 promptly to inform interested people in Vienna. The event was moderated by Mr. Takehiro Kano, Minister of Permanent Mission of Japan, and welcomed two invited speakers from Japan who attended the COP21 in Paris.  Professor Jun ARIMA, Graduate School of Public Policy, the University of Tokyo, and Ms. Sumiko Takeuchi, Senior Fellow International Environment and Economy Institute/ Deputy Project Leader The 21st Century Public Policy Institute.


Professor ARIMA gave a presentation commencing with the key issues of the Paris Agreement. Professor Arima then outlined the reasons why the adoption of Paris Agreement was successful and discussed the relationship between the COP21 agreement and nuclear energy. Ms. Takeuchi gave a presentation on Japan’s energy mix and the current situation of the nuclear power sector in Japan.


Participants to the workshop included the ones from Permanent Missions of various countries in Vienna and IAEA staffs. The presentations were followed by a Q &A session, and speakers and participants discussed issues such as a future prospect of the entry into force of the Paris Agreement and associated trend of major countries, public communication to restore confidence of citizens in nuclear energy and the IAEA’s role in the review of nuclear-related regulations.