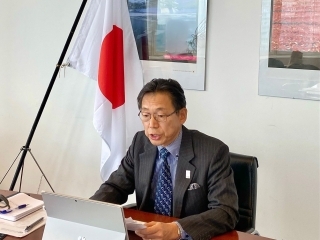 Statement by H.E. Ambassador HIKIHARA Takeshi
at the 48th Session of the Industrial Development Board of UNIDO


[Agenda Item 3: Annual Report of the Director General for 2019]

Japan commends UNIDO’s achievements in 2019 under the leadership of Director-General Li Yong.  The annual report demonstrates UNIDO’s active role in the implementation of the SDGs, especially through promoting the Inclusive and Sustainable Industrial Development (ISID).

UNIDO is an important partner for Japan in the SDGs implementation.  Let me now touch upon three main areas of our focus in this context.

First, the response to COVID-19.  As described by Prime Minister Suga of Japan in his speech at the UN General Assembly in September, the COVID-19 pandemic is “a human security crisis, posing a threat to the lives, livelihoods and dignity of people across the globe”.  Japan commends UNIDO’s quick and proactive response, stressing the key role of industry in protecting people’s health and livelihood.  The organization clearly demonstrated its capacity to collaborate with the private sector in the newly funded project of ITPO Tokyo.  Japan supports this project with its contribution of about 4 million USD, and 13 Japanese private companies were mobilized to assist 12 developing countries in their response to the pandemic through transfer of relevant technologies.  Japan highly appreciates the timely work of UNIDO and expects early tangible outcomes.

Second, the environment and energy.  Japan welcomes that UNIDO has intensified its work in line with General Conference Resolution 18/Res.7, including its contributions to climate neutrality and circular economy.  I am pleased to announce that UNIDO and Japan recently signed a joint declaration to further explore our cooperation in various areas related to the environment and energy.  We hope that our long-standing cooperation on global environmental issues will be even more strengthened, and expanded to new areas including circular economy and marine plastic litter issue.

Third, the industrialization of Africa. Japan commends the progress made by UNIDO on IDDA III as its lead agency, including the finalization of the joint Roadmap for Implementation.  We highly appreciate UNIDO’s active participation in 7th Tokyo International conference on African Development, TICAD 7, last year, and the Organization’s various initiatives to create ideal synergies between IDDA III and the TICAD process.  UNIDO ITPO Tokyo is currently holding a two-week B2B matching event “Africa Industrialization Day 2020 in Japan”, with the participation of over 140 African companies.  Japan expects UNIDO to continue promoting the industrialization in Africa through private sector partnerships.

As I emphasized during the last PBC session, sound and efficient finance and management are crucial for UNIDO in order to effectively address the needs of the international society at a difficult time of the global pandemic.  In this context, let me recall the Member States’ obligation to make full and timely payment of their assessed contribution.  Revision and reform of the Secretariat’s work, guided by the internal and external evaluation and oversight bodies, must also continue.  Japan further looks forward to the productive dialogue between the Secretariat and Member States in order to formulate the Organization’s first Result-based budget for the next biennium.